John is a regular forum contributor on pre67vw.com and thesamba.com and also has his own website, http://www.vwjudsonregister.org.uk. He’s a keen photographer and has posted some great photographs over the years, some of which are featured here – including, as you would expect, some of his own Low-Light Karmann Ghia. I would Like to thank John for writing the words to accompany his photographs.

“Running the VW Judson Register website since 1999 has been a time consuming exercise. Sometimes you think “what did I get myself into?” A constant stream of questions when you least want them, (usually the same ones) questions you feel you have almost an obligation to answer. It’s a minor gripe really when you realise the end result, after 12 years, a massive address book and some very good friends in the hobby. To be honest, it’s a good trade.

So now to my approach to VW Photography. It’s very simple – Pictorial. I have nothing against adventurous photography. Close-up, angled, abstract I like it all and have tried it all over the years but having an information website, I now shoot strictly for information in what I like to think is a simple and I hope, an attractive style. The Judson Register has a ‘Gallery’ with contributions from people who live in very scenic surroundings. I always ask them to drive out to some attractive location, put their car in front of it and take a picture. That’s how I do it, there’s very little to teach in this style of photography but I’m afraid most contributors to our ‘Gallery’ still drive their car out of their garage and shoot it standing on their driveway!

The picture of my Ghia above was taken on a crisp morning in February 2008. I was going to visit a bookbinder friend of mine who works in Winchester next door to the college so I though I’d take the Ghia and my camera. Winchester is just 10 miles down the road for me and it affords plenty of photo opportunities. This picture was taken on double yellow lines outside the grounds of Winchester Cathedral. The sky turned out a milky white so I Photoshopped a graduated light blue to white fill to add interest in the sky area.

The Brazilian Kombi came in effect from my Judson address book; an association I made with a Judson Register member Yel Feu, a Brazilian aircooled nut and now, good friend. Yel joined  the register in 2002 and we struck up an immediate rapport. Yel kept on inviting us to visit and in February 2004 Jacqui and I accepted Yel and his wife Eliane’s invitation. Yel is the proverbial ‘poacher turned game-keeper’. In his younger days, an aircooled VW street racer,  later a Brazilian Policeman. The holiday was fantastic, a great experience of Brazil’s  natural wonders plus the VW input. It was an eye opener – an aircooled VW on every street and of course we visited a few of Yel’s VW friends.

Amongst his friends in Curitiba was Luiz Bertoldi who owned a vintage parts and accessory shop. At the back of his shop Luiz kept an very well preserved ’63 15 window Kombi. Luiz at the time the second owner and unbeknown to me, I was shortly to become the third. Looking over the Kombi I found a ‘For Sale’ notice on the driver’s seat and after a quick calculation I realised it would be a great buy but alas, I had insufficient space at home.

At this time in Brazil the Kombi was not the “cool” must have vehicle it was destined to become…interest in the Beetle far outstripped the type 2 and good examples could be picked up relatively cheaply.

The week after our return to the UK, old friends Dave Cantle, Trev Mouncey and I went to the “Volksworld Show” at Sandown Park. As we sat talking in Trevor’s ’64 Samba the conversation got round to the Kombi I’d seen on my holiday, interest in the pictures I’d taken was encouraging. Quickly Dave and Trevor presented a solution to the storage problem and offered to share the purchase of the Kombi. It seemed a simple solution so I emailed Brazil, Yel phoned Luiz and the process was under way.

After overcoming a special brand of South American bureaucracy that took two months to sort out the Kombi arrived at Tilbury in late May 2004 and within the week it had its MOT and registration. The picture you see here is it’s first lunchtime outing to a local hostelry, The Bear & Ragged Staff near Romsey in Hampshire.

This second picture of my 1958 Karmann Ghia and The New Forest Hunt is a case of being in the right place at the right time. If I’d arranged to meet the hunt for a picture shoot I could never have arranged what turned out to be a near perfect composition. I’d just had my new Firestone whitewalls fitted and thought I’d take the Ghia out to some favourite locations in The New Forest. I took my pictures and setting off home across the old WWII airfield at Stoney Cross I spotted the hunt in the distance. I quickly pulled over and awaited their approach. I was just hoping I could catch them in the background as they passed but fortunately the Master of the Hounds came across to look at the car and all the others followed – bingo!

The final picture is of Ronnie Feitelson’s ’59 Single Cab waiting for the off over the measured mile at Bonneville’s ‘World of Speed’ in September 2011. I had a great time there meeting many of my ‘address book friends’ and just soaking up the atmosphere of the legendary Salt Flats. Being a Samba.com moderator for their ‘Vintage Speed’ and ‘Karmann Ghia’ forums, I’ve been exposed to the exploits of the ’36hp Challenge’ participants on a daily basis. The ’36hp Challenge’ is high performance engine building in handcuffs. I suppose most competitive motorsport has its ‘handcuffs’ in the way of strict regulations and limits but when you start off with an engine case designed for the stresses of a massive 36hp, squeezing northwards of 150hp from these humble beginnings is quite an engineering feat.

Amongst the VW runners in September were Tom Bruch and Dick Beith who made their first competitive visits to Bonneville the best part of 50 years ago – amazing! The whole ‘VW Show’ at Bonneville is organised by another veteran Bonneville racer and historian Burly Burlile, wonderful man without whom the whole thing would have never got off the ground.

The racing starts on the Tuesday and finishes on the Saturday. We were there for the Thursday and Friday – the Thursday clear, sunny with temperatures in the mid 90s and Friday overcast mid 80s and threatening rain. As you’ll see Ronnie’s Single Cab is pictured under glowering Friday skies, which although rain would have meant a wash-out the cooler weather was good for racing. Fortunately the rain held off until late in the afternoon but washed out our ’36hp Challenge’ bar-b-que. We adjourned to the Rainbow Casino restaurant in nearby West Wendover. The whole of my US holiday was shot on my entry level Sony A200 digital SLR for camera .raw HDR processing, including the picture you see here.” 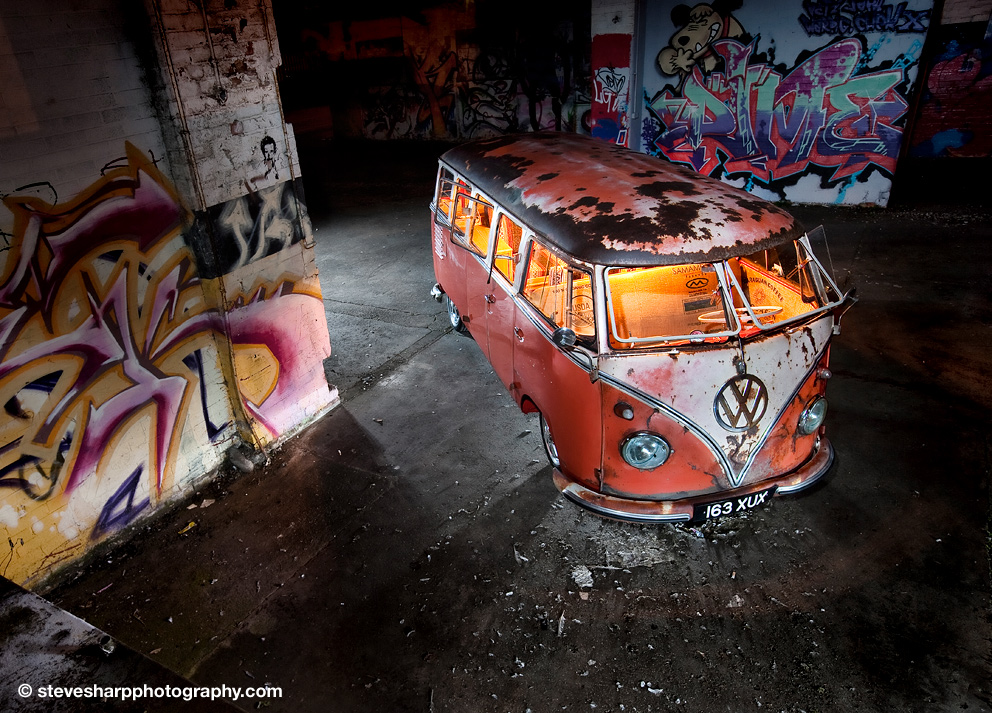 I am a photographer based in Leeds, Yorkshire, UK. Specialising in professional car photography for advertising, editorial and private commissions.

Also specialising in portrait promo photography for musicians and artist in need of portraits or album cover artwork to help deliver their message.

Landscape, low light and night photography is where I’m really in my element. Combining these with one of my favourite techniques ‘flash and light painting’ can really bring a subject to life and show it in another light, creating sometimes other worldly scenes. I regularly contribute articles to National and International magazines where my expertise in this field is shared. I now conduct evening workshops where I show how to create stunning and creative nightscape and low light images. If you would like to participate in an evening workshop or discuss anything else please get in touch. 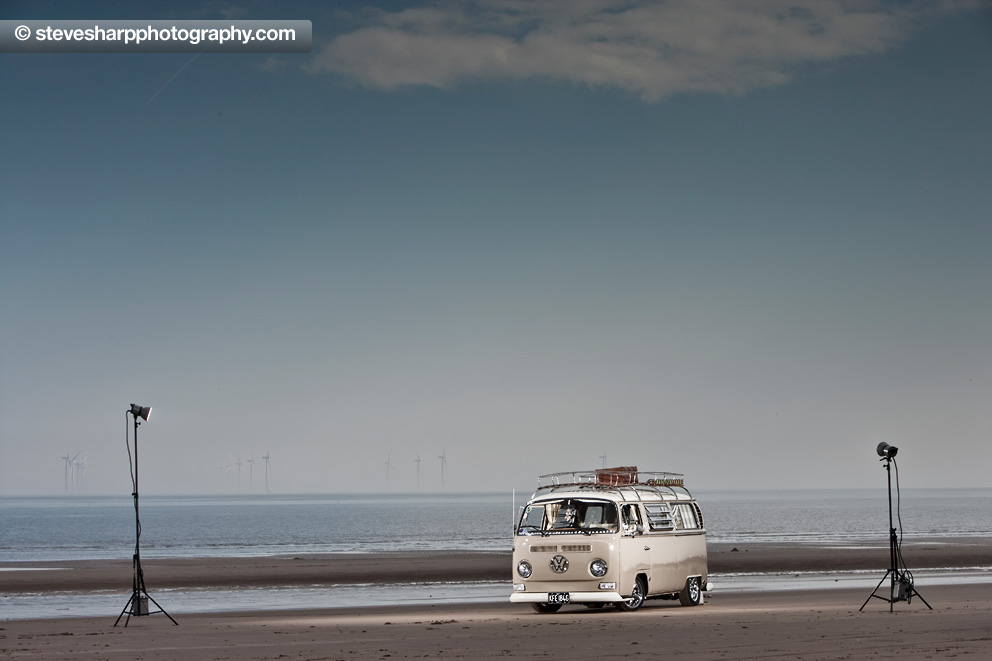 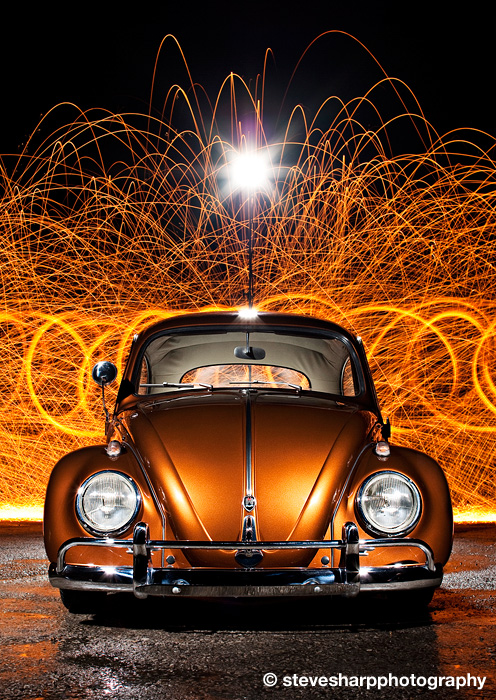